Home Unlabelled A photo has emerged that appears to show Barack Obama very subtly giving Donald Trump the finger before shaking his hand.

A photo has emerged that appears to show Barack Obama very subtly giving Donald Trump the finger before shaking his hand. 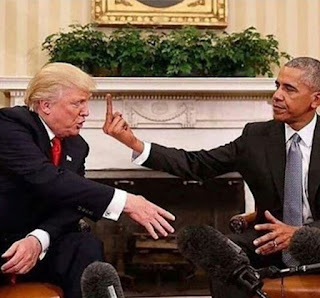 The president and the president-elect met at the White House yesterday, after Trump was elected president with a narrow margin and without the popular vote on Wednesday.

Despite the long-held acrimony between the two, Obama and Trump attempted to look normal as they awkwardly shook hands and posed for photos in front of the media.
But could this photo, which we’re sure is 100% legit and not photoshopped at all, betray Obama’s true feelings? 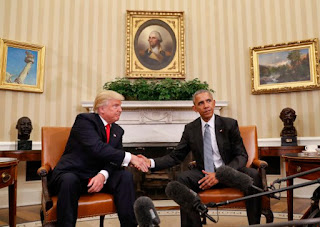 This probably was photoshopped to be fair.

While Obama probably didn’t flip the bird right in Trump’s face (oh, but we can dream), it’s no secret that the two don’t really like each other all that much.

Or one thing, Trump spent almost the entirety of Obama’s presidency claiming that he wasn’t born in America and that he’s a secret Muslim. 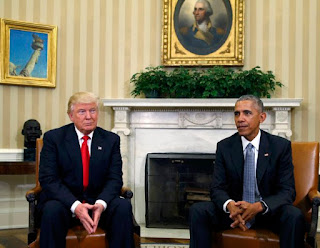 The president-elect was also openly endorsed by the KKK – a fact that must have stung for Obama, the country’s first black president, when he had to welcome him into the White House.
The tension and awkwardness was palpable, even without anyone giving anyone else the finger.
Just look at these equally tense photos from the meeting.

Well, my take on this, this is simply photoshopped to suit the evil intent of the  progenitor. Obama is too responsible to indulge in such an act, even in the front of the media. Gosh, people should take it easy on this dudes before you set the world ablaze with your wicked acts!