Home gist Chelsea Manager Antonio Conte, has been Charged by FA for Misconduct.

Chelsea Manager Antonio Conte, has been Charged by FA for Misconduct. 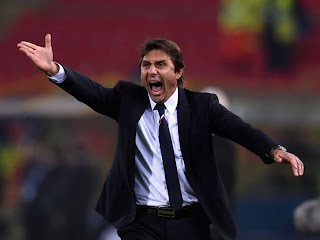 Chelsea manager Antonio Conte has been charged by the Football Association with misconduct following his dismissal against Swansea City yesterday night. He was sent to the stands in the 43rd minute of his side's 1-0 Premier League victory on Wednesday.


The Chelsea manager had to watch the entire second half on a dressing-room TV after disputing the referee's decision not to award a corner when the game was goalless. He has until 18:00 GMT on Tuesday to respond to the charge, the FA says.

But the Italian later apologized for his behaviour after the match, in his words: "I was frustrated. I made a mistake. During the game I suffer. With my players I suffer. It's a pity. I apologise for this."