David Silva Extends his stay at Manchester City as he signs a one-year contract extension. 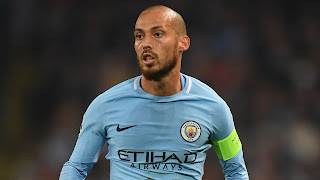 Spain international and Manchester City midfielder David Silva has extended his contract by a year, keeping him at the club until 2020. The 31-year-old Spaniard joined the Blues from Valencia for £24m in 2010. Silva has won two Premier League titles, an FA Cup and two League Cups during his time with City. The midfielder has made 324 appearances in all competitions for City, scoring 52 goals. This season he has found the net once in 18 games.


Silva has this to say;

"I am incredibly proud of what I have achieved at City in my seven and a half seasons here and with Pep in charge, I feel we are in a great position to win trophies this season and beyond," he said. The style of football we are playing is a pleasure to be a part of and I look forward to winning more titles in the years to come."