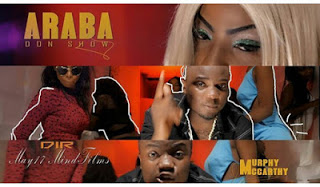 After much anticipation from the growing fans of "Murphy McCarthy" for the Release of the Visual for Araba Don Show single which have since received massive airplay across Nigeria and Ghana, The CEO of Alleluya Boyz Records and one of the fast rising Artiste at the moment Murphy McCarthy is here with the visual as directed by South South Award winning Video Director May17MindFilm, The video was shot at different location in the city of Benin, Lagos and Accra.