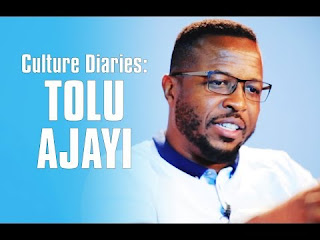 Culture Diaries is an interview series which spotlights artists, culture creators and tastemakers shaping the Nigerian art and culture landscape. The series offers rare insights into the creative process, challenges and honest conversations about the Nigerian creative scene. The series is created and hosted by journalist and poet Wana Udobang.


Tolu Ajayi has led the production of world-class advertising for over 15 years. His work as agency producer has formed a part of television’s most memorable moments within the past 10 years with numerous projects for clients like Guinness, GTBank, Nestle, Access Bank, Interswitch, Procter &Gamble, and MTN. His widely acclaimed short Blink recently was shortlisted for the Signes De Nuit film festival in Paris France. He is the director or the critically acclaimed and award-winning short film The Encounter. He has worked as a director on television shows like Tinsel, MTV Shuga and Gidi Up.