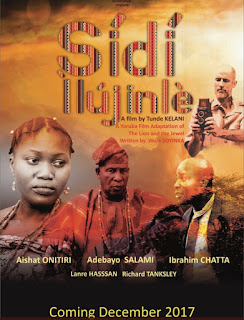 Mainframe Films has released the 1st teaser for the adaptation of Wole Soyinka’s "The Lion and the Jewel" titled "‘Sídí Ìlújinlẹ". Talking about the movie, is a play by Soyinka, which chronicles how Baroka, the lion, fights with the modern Lakunle over the right to marry Sidi, the titular Jewel.

Speaking to Punch, Kelani revealed that he had Soyinka's approval to adapt the book into a film.  He said it  was actually Soyinka who inspired him to embark on the project. He further revealed that when he took a closer look at "The Lion and the Jewel," he discovered that it wasn't as simple as many people thought.  For one, the play is more of poetry than prose, he added.

"Sidi Ilunije" isn't Kelani's first book to film adaptation. He adapted Akinwumi Isola’s "O Le Ku" and "Koseegbe" into movies. He also adapted Bayo Adebowale’s "The Virgin" into a film titled "The Narrow Path." The award-winning film "Maami" was also adapted from a story by Femi Osofisan.
The indigenous film was shot in the city of Ibadan, and starring- Adebayo Salami as Baroka, Ibrahim Chatta as Lakunle, Rich Tanksley and Ayisat Onitiri as Sidi.