The first official trailer of Omoni Oboli’s new movie Wives on Strike: The Revolution has been released.
Domestic violence has hit close to home and the women must engage the government or become the government. The situation, it seems, is impossible to ignore. Twists, drama, frustrations and schemes makes this tug of war a hilarious revolution. 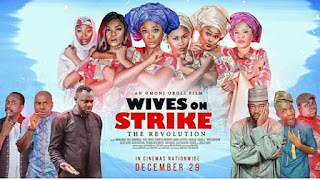