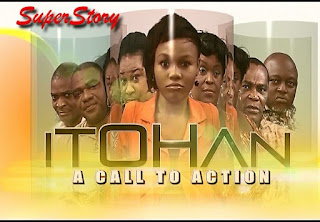 In recent times, there has been abundant public outcry regarding the international migration crisis which affects a large number of Nigerians and their families back home. Wale Adenuga Productions has once again contributed its quota to increasing the awareness and providing solutions by re-airing the award-winning Superstory season titled Itohan: A Call to Action.


According to the producer, Wale Adenuga Jnr., “Since we produced and first aired Itohan: A Call to Action years ago, the story has gone on to gain recognition from several Federal and State MDAs, NGOs and has international awards. This recent public outcry regarding Human Trafficking, Slavery and Forced Prostitution has resulted in overwhelming requests from viewers for us to air the story again as the lessons in it directly address the relevant issues and provide solutions for all stakeholders. We would also be giving more insight as we discuss each episode with viewers during our interactive Superstory Plus live viewer-feedback TV Show.”
Itohan: A Call to Action primarily revolves around a young lady, Itohan, who is traveling to Europe through an illegal route, with genuine aspirations to be signed on as footballer in an European Club, but is being deceived by a gang of men who intend to sell her and some other young ladies to a notorious prostitution ring once they get there.
The story is based on real life events and contains several elements of Action, Romance, Comedy, Betrayal and Suspense; starring a wide range of popular artistes including Tamara Eteimo, Yemi Solade, Mary Lazarus, Kelechi Udegbe, Racheal Oniga, Charles Okocha, Patience Oseni, Jide Alabi, Nobert Young, Gloria Young, Hakeem Rahman, Femi Durojaiye, Chidex Brown, Ekemini Nankere, Dayo Davies and others.
The story commences on December 5, 2017, and will be available to millions of families each week through key stations across Nigeria; including NTA Network (Thursdays 8 – 9pm), AIT Network (Thursdays 9 – 10pm), and wapTV on DStv 262, StarTimes 116, GOtv 102, StarSat 189 and MyTV (Thursdays 8 – 9pm; with repeat broadcast on wapTV Fridays 10 – 11am); with the Superstory Plus weekly viewer feedback show airing every Friday 11:00 – 11:30am exclusive to wapTV.
Watch the exciting trailer below: https://youtu.be/rFGLjNrMKGA