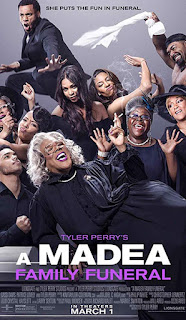 Tyler Perry's 'A Madea Family Funeral' is an upcoming American comedy film.  It is the eleventh installment of the Madea film series.

A joyous family reunion turns into an unexpected nightmare when Madea and the gang find themselves planning a funeral in the backwoods of Georgia.

The film was written, directed and produced by Tyler Perry.
Starring- Perry in several roles, including as the titular character, as well as Cassi Davis and Patrice Lovely.

The film is scheduled to be released in the United States on March 1, 2019, but will hit Nigerian cinemas from 12th April, 2019. Perry has stated that he intends for this to be the last Madea film.