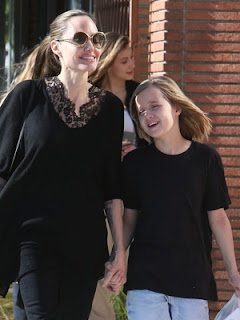 The amazing thing about the duo is their great resemblance, and it got people stuck while they went on a shopping trip in Los Feliz yesterday. Their love for each other was as visible as they held hands, happily laughing as they stepped out.

In spite the news that Jolie’s estranged hubby, Brad Pitt was at the birthday bash of Jennifer Aniston which held on the 9th of February, she did not allow that affect her happiness, even though she might as well feel bad. 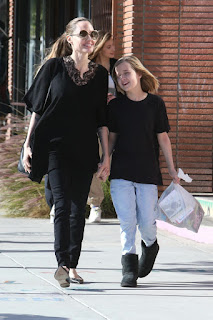 According to a source: “Angelina is shocked that Brad went to Jennifer’s birthday party…Jolie was aware they were back in touch, but didn’t realize they’d gotten that close again. It brings up a lot of tough emotions for Angelina but she’s not dwelling on it.
As hard as it is for her to know that Brad and Jennifer are hanging out, she knows there’s nothing she can do about it and she is choosing not to focus her energy there.” 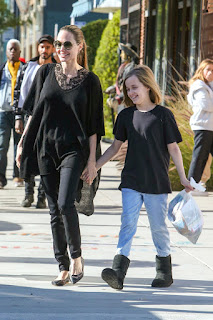