Balotelli re-discovers his scoring ability- makes it 3 goals in 4 matches since joining Marseille. 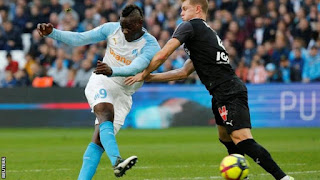 Mario Balotelli who did not score in about 10 games at Nice in 2018-19 before Marseille side has now scored for the third time in four games for his new club, as there defeated Ligue 1 one side, Amiens 2-0.

Florian Thauvin had opened the scoring with a 19th minute opener after 19 minutes before Balotelli added the second in the 25th minute.

28 year old Balotelli who had previously played for Manchester City and Liverpool joined Marseille on a free transfer from Nice during the 2019 January transfer window.
The victory took Marseille from sixth to fourth for the main time.