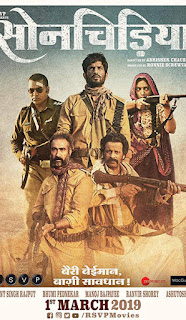 Sonchiriya is an upcoming Indian action film. The film presents a rooted tale set in morena in Chambal.

Set in the Chambal valley, the film follows the story of a legion of dreaded, warring dacoits who once terrorised the Indian heartlands.

The film was directed by Abhishek Chaubey.