Enjoy the Thrilling Teaser Trailer for “Frozen 2” as Film drops later this year. 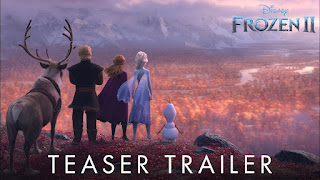 Disney has released the trailer for “Frozen 2,” the sequel of animated film “Frozen”. The new 2-minute trailer saw the addition of two new characters. Since the release of the trailer, it is being speculated that one of the new characters could be Elsa’s same-sex partner.

The film is directed by Jennifer Lee, Chris Buck and Peter Del Vecho, both Academy award-winning directors. It also features the voices of Idina Menzel, Kristen Bell, Jonathan Groff and Josh Gad.
“Frozen 2” opens in theatres on the 22nd of November, 2019. See trailer below…
Watch- https://youtu.be/eSLe4HuKuK0