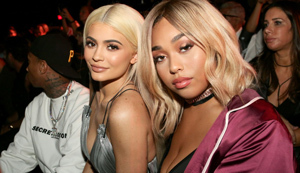 Jordyn Woods, 21, is moving out of Kylie Jenner’s luxury Hidden Hills, California home. That’s what multiple sources close to the Keeping Up With the Kardashians family reveals.

A day after the jaw-dropping report that the model allegedly was seen getting cozywith NBA star (and Khloe Kardashian’s man), Tristan Thompson, at a Feb. 17 house party, we’ve learned that she will soon no longer be Kylie’s roomie. The stunning story was bound to cause outrage among the tightknit Kar-Jenner clan, as Jordyn was considered part of the family.

“Kylie is 100 percent hurt by this, for sure…Kylie is let down and disappointed in Jordyn whom she feels betrayed the family. Jordyn is currently making new living arrangements and moving out.” At this point she’s probably going to move in with her mother, Elizabeth Woods, in Calabasas, another source reports.
The formerly inseparable BFFs, Kylie and Jordyn, were together at the time that the cheating scandal story broke on TMZ on Feb. 19. “Kylie and Jordyn were home when all the news erupted about Tristan and Jordyn,” our sources say. One of the insiders also notes that “numerous people” and “cars after cars” have arrived at Kylie’s multimillion dollar home ever since the devastating revelation. “Kris Jenner was among the many visitors to stop by Kylie’s to talk about how to handle the situation,” one insider says, referring to the momager.
As for whether the whole drama is being captured on camera, multiple sources confirm that too. The Kar-Jenners are currently filming scenes for their E! Reality TV series, KUWTK. So, fans can apparently expect to see this latest plot twist unfold on the small screen. “The Kardashians are filming it all,” our sources claim. “It will be used to promote the next season for sure.”
HollywoodLife has reached out to Kylie, Jordyn, Tristan and Khloe’s respective reps for comment. Jordyn’s rep responded with, “No comment,” however, Kylie, Khloe and Tristan’s reps have had no response. In the meantime, one Kardashian who is definitely making her feelings very clear about the whole situation is Kim Kardashian. As of February 20 she has unfollowed both Jordyn and Tristan on Instagram.