Kanye West’s 5 year old daughter, North West has got a Boyfriend already, who showers her with beautiful gifts. 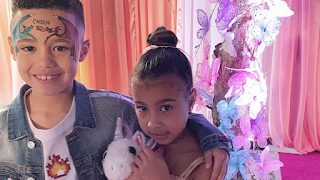 Looks like Kim Kardashian isn’t doing all the spoiling! North West has a not-so-secret admirer who has been showering her with luxurious gifts. It’s official: Life is unfair. While it has been documented how much millionaire mom Kim Kardashian, 38,  North West, 5, has found another person to shower her with gifts.

The fashionista daughter of Kim and Kanye West, 41, apparently has a “boyfriend” (well, as much as a five-year-old can have!): Caiden Mills, 7, who is 41-year-old rapper Consequence‘s son. Caiden posted a picture of himself on Instagram on Feb. 14 holding a Tiffany & Co. blue bag and a heart-shaped box of chocolates, captioning the Valentine’s Day post “Love is in the air,” and after his several posts in honor of North, he probably picked out the gifts just for her!

But that wasn’t the first time Caiden seemed to pick out a Tiffany & Co gift for Northie! Caiden first shared a picture of himself on Instagram with the iconic blue bag on February 6th. “Shout out to Northie, Babygirl I’ll see you soon,” Caiden captioned his photo, followed by a string of kissing-face emojis. 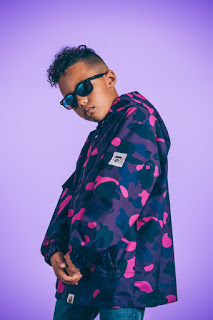 He showed what gift he picked out for her as well, posting a photo of himself looking at a small heart necklace. The two children seem to be good friends – Caiden went to the elaborate birthday party on Feb. 9 for Stormi Webster, North’s one-year-old cousin, with his father, according to Hollywoodlife. Caiden posted a pic from the event, complete with his dragon face-paint, with his arm wrapped around young North! The two kids are so cute!

Caiden clearly gets along with North’s family! In addition to going to Stormi’s birthday party, he also shared a photo of himself and North with her younger brother, Saint, 3, on their play date at the Exploratorium in San Francisco! 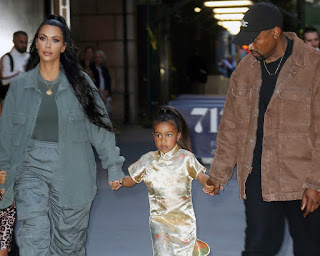 In the photo, North even looks like she’s wearing the necklace Caiden picked out! We’re so glad that North has found another friend to go to museums and birthday parties with, since she really is just a normal five-year-old at the end of the day. She has as many gifts and luxury items as she wants from her family, but friendship is a gift that’s totally priceless!