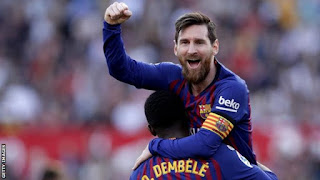 Barcelona super star footballer, Lionel Messi scored his 50th career hat-trick this evening as Barcelona came from behind to thrash Laliga side, Sevilla 2-4 and go 10 points clear at the top of the Spanish league table.

He first equalized with a stunning volley from 16 yards, and then leveled for a second time with a curling shot from the edge of the box. The Argentine then chipped past Tomas Vaclik for his third, his 36th goal in 35 games against Sevilla, before setting up Luis Suarez for an injury-time fourth.
In all competitions this 2018/2019 football season, he has 33 goals in 32 games - including six in the Champions League as Barcelona chase the treble. His third goal was his 650th career strike - 585 for Barca and 65 for Argentina.