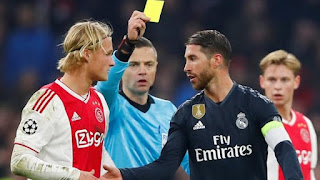 Sergio Ramos fouled Kasper Dolberg in the 89th minute with Real leading 2-1, earning a suspension for the second leg.Television commentators intimated he sought the booking but Uefa rules state a player who purposely obtains a booking can be banned for two games.

The Spain international was making his 600th appearance for Los Blancos and his side secured a first leg advantage through Marco Asensio's goal two minutes before the controversial booking.
Afterwards, Ramos, 32, tweeted: "I have not forced the card".
Pundit Martin Keown said it was "very obvious" Ramos was looking to pick up a third booking in the competition to be banned for the second leg - a suspension at this stage greatly reduces the risk of missing a match later in the competition with all bookings wiped following the quarter-final stage, reports BBC.
Following the win, Ramos told reporters he would "be lying if I said I didn't force [the booking]". But later on social media he said the view he intentionally played for the yellow card "hurts", insisting "I have not forced the card".
"In a game there are many tensions, many sensations and many pulsations," he tweeted. "You have to make decisions in seconds. The best of today is the result. The worst, not being able to be with my team-mates for a game."
Ramos' team-mate Dani Carvajal received a two-game ban from Uefa when he was judged to have been booked on purpose in the final minute of a 6-0 win over Apoel Nicosia in last season's tournament.
Ramos and former Real midfielder Xabi Alonso were both booked late on in a 3-0 quarter-final first leg victory over Galatasaray in 2013. Both players were also criticised in 2010, when they were booked and sent off in the final five minutes of a group game with Ajax, meaning they missed the next fixture, with Real already assured of progress to the knockout stage.