Home music News/Gist R. Kelly arrested by police in Chicago over a case of Sexual Abuse.

R. Kelly arrested by police in Chicago over a case of Sexual Abuse. 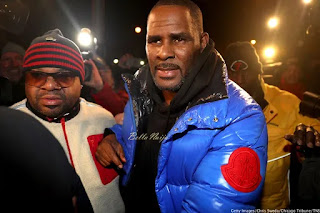 Yesterday it was revealed that music icon R. Kelly was being charged with 10 counts of aggravated criminal sexual abuse. The legendary RnB singer has come under a lot of sexual abuse accusations in recent times, especially with the release of the ‘Surviving R Kelly,’ documentary which has cast a lot of damage on the image and person of the singer, globally.


R. Kelly, who has never been convicted and has denied all allegations of sexual abuse against women and minors for decades, was charged on Friday, Kim Foxx, Cook County state’s attorney said.

The 52-year-old R. Kelly was reportedly arrested at 8:15 PM on Friday evening (February 22) at a police station in Chicago, Ill, after he turned himself in to the police.
The charges are considered a Class 2 felony and each charge carries a maximum sentence of three to seven years in prison, reports BN news.