Real Madrid Languishes in pain after a Shock home ‘league’ defeat with Captain, Ramos receiving yet another red card. 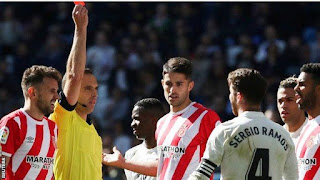 Real Madrid missed the chance to go second in La Liga as Girona came from behind to record a surprise away win, in a match that saw Sergio Ramos receiving his 19th red card in La Liga.


Casemiro had puyt the host on the lead with his powerfully header through a cross from Toni Kroos, but Cristhian Stuani's penalty made it 1-1 in late second half after Sergio Ramos handled the ball.
Portu netted the winner with a diving header after Anthony Lozano's shot had been parried by Curtois, before Ramos was sent off in injury time after receiving a second yellow card when he tried to clear a ball through an overhead kick but caught Girona's Pedro Alcala.
Ramos has had more Laliga career red cards, more than any other player in the Spanish top flight.