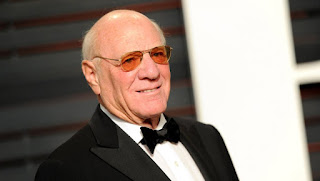 The current IAC and Expedia Group chairman and former film and television CEO argued that the entertainment industry has lost power by being outbid by tech giants, and that Jeff Bezos has handled his National Enquirer skirmish "courageously."


Onetime film and television CEO Barry Diller offered an apocalyptic vision of the entertainment business during a podcast interview released Friday, arguing that in the face of Netflix and Amazon, "Hollywood is now irrelevant" and yet "those who chase Netflix are fools." The current IAC and Expedia Group chairman discussed how the traditional entertainment business has been caught in the headlights of streamers' new and successful business model during an interview with Kara Swisher on the latest episode of her podcast, Recode Decode.
Taking Amazon at an example, Diller explained, "Amazon’s business model has nothing to do with anything anybody who’s been in the entertainment business has lived with their whole lives, which is, we have one job. We entertain the folks. If they like what we do, they buy a ticket or subscribe to this or get that." Diller continued, "Amazon’s model is saying, 'If you join Prime, we’re giving you things.' ... that model, to people in the entertainment business, is like, “Oh my god, how did that happen? I don’t know how to do that one. I don’t know how. I only know how to serve my entertainment customer.”

Though complimentary toward the accomplishments of Netflix and Amazon's streaming services, Diller offered a note of caution about Apple's incipient streaming video service, which is launching in March. Diller said Apple executives were "prancing around" in streaming and "have their little feet in it." He added, "Everybody is going to play in this, but I think that those who chase Netflix are fools. Or try to compete with Amazon Prime, because I don’t think there’s any ability for anybody in the, let’s call it the ... The media business, the entertainment business, who do so."

Still, Diller was more charitable about Disney's chances with Disney+, its upcoming streamer launching in a year or a bit longer. "Disney has good programming," he said. "They’ll get some subscribers. But to chase ... Netflix has won this game. I mean, short of some existential event, it is Netflix’s. No one can get, I believe, to their level of subscribers, which gives them real dominance."

Due to Netflix's mega-deals, which have offered creators like Shonda Rhimes and Ryan Murphymajor sums to jump ship from traditional studios, Diller concludes that "Hollywood is now irrelevant." To make his case, Diller argued that Hollywood consolidated power when six movie companies got so big they were able to buy out their competitors. "For the first time, they ain’t buying anything. Meaning they’re not buying Netflix, writes Hollywood Reporter.

They are not buying Amazon....So when you ask about Hollywood, what connotes 'Hollywood,' which is that that era is over and finished," he said. As a result, six movie studios have whittled down to five and now will only be "making stuff" versus "making stuff" and distributing it, he added.

Diller also weighed in on the skirmish between Amazon CEO Jeff Bezos and The National Equirer, which Bezos claimed attempted to extort him by threatening to publish explicit selfies. Diller, who said Bezos is a friend, said, "I think, under the circumstances, Mr. Bezos has handled all this recentness, I think he’s handled it courageously."

The IAC exec, a former board member of the Washington Post, also revealed that he was initially against the Post being up for sale in 2013, which eventually led to Bezos' purchase of the paper. "I was the one who said we shouldn’t sell the Washington Post ... Because I thought that the Graham family, which had done such a wonderful job being its steward for all that time, had, in their company, which was called The Post Company, at the time, had enough resources to be able to invest more in the Washington Post and continue to be its steward," he said.

"And so when Mr. Bezos bought it, I thought, well, that’s fantastic. Because I certainly know him and his sense of obligation, responsibility, quality, and he’s done a fantastic job with it. And so, the reluctance of the Washington Post company and the Graham family to continue to support it and sell it to the right person was a great act of great good luck, because now, the Post is thriving."