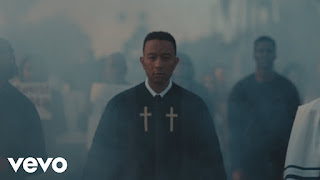 Talented and legendary soft voice singer, John Legend comes through with the official video for “Preach”. The video which was released on February 15 already has close to five hundred thousand Youtube views.


“Sometimes we can get so frustrated by the news and what’s going on and there’s this battle going on in ourselves. Do we become apathetic? Do we become engaged? Do we just talk about it, or do we do something?” -John Legend writes on the essence of this his latest song.