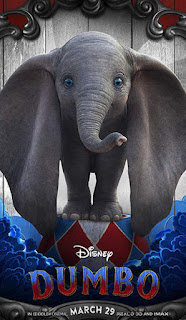 Dumbo is a 2019 American fantasy adventure. It is inspired by Walt Disney's 1941 animated film of the same name, itself based on the novel by Helen Aberson and Harold Pearl.

Circus owner Max Medici enlists Holt Farrier to care for a newborn elephant whose oversized ears make him a laughing stock in an already struggling circus. But when Holt's children discover that Dumbo can fly, persuasive entrepreneur V. A. Vandevere and an aerial artist named Colette Marchant swoop in to make the peculiar pachyderm a star.

The Film which will be released from March 29th, 2019 was directed by Tim Burton, with a screenplay written by Ehren Kruger. The film stars Colin Farrell, Michael Keaton, Danny DeVito, Eva Green, and Alan Arkin.