Home News/Gist A man is a luxury, not a necessity – Media woman, Toke Makinwa brags as she shakes a major table.

A man is a luxury, not a necessity – Media woman, Toke Makinwa brags as she shakes a major table. 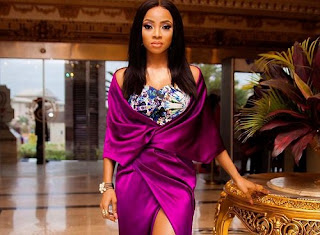 Media personality and sexy diva, Toke Makinwa has stirred yet another controversy, following her sensitive and provocative statement via the comment box of her Instagram page.


First, she made a post with the caption: “I’ve had so much crazy shit happen to me that being happy and in a place of peace almost scares me. I’ve had too many “almost” moments but then I heard the spirit whisper to me. Don’t judge my happy, I spent so long being sad, it’s my turn now”.
It was the post which prompted a comment from one of her followers identified as Tollawilliams, who advised her to go get a man who will be by her side, at least to make her happy, and otherwise.
But Toke rather said to the person: 'a man is  not a necessity, a man is a luxury. Like desert'. Many others commenting on the post says Toke's opinion is rather as a result of frustration and heart breaks depression. See all that transpired between them below… 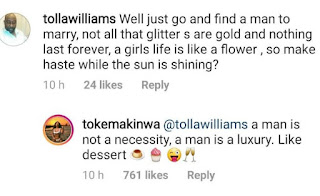