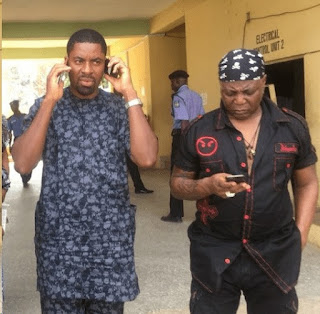 The last has not been heard in the fraud allegations the leaders of the civil society group, Our Mumu Don Do, Deji Adeyanju and Charly Boy, have been throwing at each other.


Yesterday, an audio recording surfaced online in which Charly Boy allegedly owned up to Deji Adeyanju, to have collected money from the spokesperson of the Buhari Campaign Organization, Festus Keyamo, during the build up to the just concluded election, writes LIB.

Well, Charly Boy has now come out clean. In a new interview with Roots TV, the singer said he indeed collected money running into 9 digits from Keyamo to release a song against PDP Presidential candidate, Atiku Abubakar and that Deji wanted a piece of the money.

''When Keyamo came to discuss Deji's matter, he heard my new song that I was working on where I was dissing Atiku. So when he heard the song, he was calculating what he can use the song for. I don't care but if you want to use my work, you pay for it. Of course he paid for it and they paid heavy money, in eight to nine digits''.

Recall that after his release from prison on March 1st, Deji announced his resignation from Our Mumu Don Do group, accusing Charly Boy of compromising on the values of the group.
Watch the video of Charly Boy admitting to collecting money from Keyamo.