Against all odds, actor Desmond Elliot wins his Re-election bid. 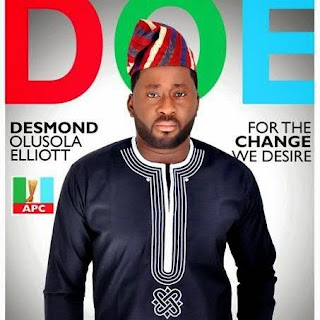 Nollywood actor, Desmond Elliot, who is the candidate of the All Progressives Congress (APC) Surulere constituency l Lagos State House of Assembly election has been re-elected for a second tenure.


The handsome actor turned politician scored 15,357 votes, while his closest rival, Benjamin Olasunkanmi of the Peoples Democratic Party (PDP) scored 3,628 votes to come second.
According to the State Constituency Returning Officer, Dr Bolajoko Dixon-Ogbechi:
”Desmond Olusola Elliot of APC having satisfied the requirements of the law and scored the highest number of votes is hereby declared winner and is returned elected.”

Remember that, Desmond Elliott, was yesterday, 9th March 2019, attacked by hoodlums as he was riding in to his polling unit in Surulere, Lagos state, to vote, because he refused giving them money. But happily, they did not hurt him.