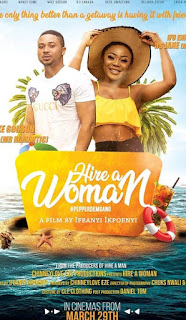 Chinneylove Eze Productions presents another blockbuster movie titled ‘Hire a Woman’ AKA Pepper them Gang, which is set to hit the cinemas this weekend.

The movie is a sequel to one of her productions titled, ‘Hire a man’ and as often, is a film you can’t afford missing.

TRAILER- https://youtu.be/g9yyLsAdhKw
The movie will be in cinemas from 29th March, 2019