Home News/Gist Bale and Isco scores as Zidane starts on a winning note.

Bale and Isco scores as Zidane starts on a winning note. 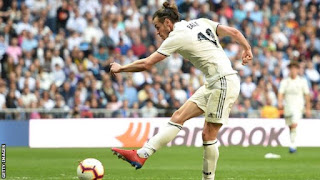 Gareth Bale and Isco scored against Celta Vigo to give coach Zinedine Zidane a winning start on his return to Real Madrid.


Isco, who was among the out of favour players under previous coach Santiago Solari, made it 1-0 when he tapped in striker Karim Benzema's low cross from close range, before Bale’s in the 77th minutes.
Real are now two points behind second-placed Atletico Madrid in La Liga, and the return of Zidane this week seems to have started paying off, and his return had lifted the spirits of the fans, who on Saturday saw signs of the team who were so successful during his first stint.
Midfielder Isco, attacking full-back Marcelo, Bale and keeper Keylor Navas found themselves recalled to the starting XI.