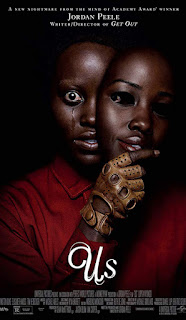 In order to get away from their busy lives, the Wilson family takes a vacation to Santa Cruz, California with the plan of spending time with their friends, the Tyler family.


On a day at the beach, their young son Jason almost wanders off, causing his mother Adelaide to become protective of her family. That night, four mysterious people break into Adelaide’s childhood home where they’re staying.

The family is shocked to find out that the intruders look like and talks like them, only with grotesque appearances.
The film which was directed by Jordan Peele, stars Elisabeth Moss, Lupita Nyong'o, Winston Duke, others.

Trailer- https://youtu.be/1tzFRIQfwXg
Film will be in Cinemas nationwide from March 29th.