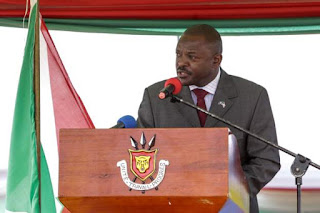 HRW said the three were arrested last week and are awaiting trial after being charged on Monday with insulting the head of state.
The agency also said the authorities had initially arrested seven schoolchildren last week, but four of them, including a 13-year-old, were freed immediately. The remaining three, all under the age of 18, spent the weekend in prison, writes bbc Africa.
HRW director for Central Africa Lewis Mudge said the father of one of the girls said on Saturday they were "too scared to eat".
Mr Mudge added: "With so many real crimes being committed in Burundi, it’s tragic that children are the ones being prosecuted for harmless scribbles.
"Authorities should focus on holding perpetrators of serious rights violations to account instead of jailing schoolchildren for doodles."
The rights activist has tweeted a cartoon and a picture of Mr Nkurunziza that has been scribbled on to show his opposition to the arrests.
In 2016, intelligence officers in Burundi arrested eight secondary school students and accused them of insulting the head of state after they drew and wrote phrases like "get out" or "no to the third term" on a picture of Mr Nkurunziza in a textbook.

Hundreds of children from several schools were also expelled the same year for defacing the head of state's photo in schoolbooks.
Mr Nkurunziza won a heavily disputed third term in 2015.