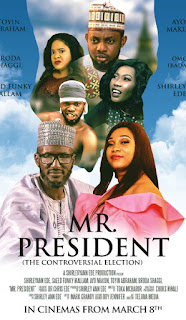 ‘Mr. President- The Controversial election’ is a story which captures electoral frauds, malpractices, crisis and more all for the desperation for political power.


The president interrupts a football game to declare his intention to run for a second term. Several issues spring up to threaten his ambition as the cunning and hilarious game of politics begins to unfold.

He must listen or ignore the advice of his cabinet to determine if he would lose or win the election against a formidable opposition party.