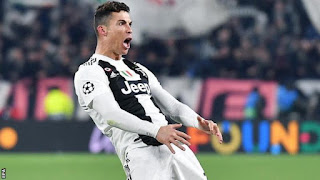 Juventus and Portugal forward Cristiano Ronaldo has been charged with improper conduct by Uefa for a goal celebration in the win over Atletico Madrid in the last 16 of the Champions League.


The 34-year-old appeared to mimic Atletico Coach, Diego Simeone (who was fined £17,000) who turned to fans and grabbed his crotch during his side's 2-0 first-leg victory.
CR7 made same gesture after his third goal of his hat-trick in the return leg as Juventus won 3-0. Though Uefa will rule on the case on 21 March.