Days after being busted for allegedly participating in a college cheating scheme, Felicity Huffman was back in court with her husband, William H. Macy, and they wore sad looks.Felicity Huffman and William H. Macy showed up at the Downtown L.A. federal courthouse Friday morning, in connection with the college bribery case. 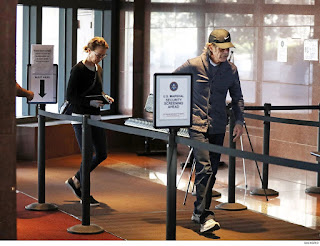 It's unclear why they had to return to the courthouse, but it's likely in connection with the $250k bond they had to post so Felicity could remain free pending trial, reports TMZ.

The feds say Huffman and Macy made a charitable contribution of $15k to participate in a college entrance cheating scheme on behalf of their eldest daughter. The indictment says the girl was given twice the amount of time to take the SAT as other students and the paid proctor agreed to secretly correct the exam afterward.

Macy has not been charged, but Huffman faces 5 years in prison if convicted. They were mum on their way into the courthouse.