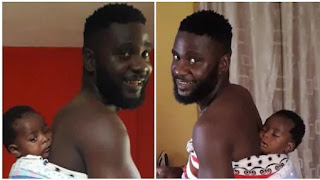 Young and talented Nigerian actor, Jide Awobona shares photos of him performing the good hubby role as he backs his lil son.


The actor is mostly known for his hilarious role in the series Jenifa’s Diary, revealed in his post that he backed his son because it is a tradition that he intends to keep upholding. See his post below…

"...buubuuu,my lepacious son, I used to be so worried about his size,several medical checks and all,but he's 100% healthy , he's on exclusive though....
My baby, I know you cant wait to be 6 months already, the breast milk is not enough, you are so strong and use a lot of energy.... Yes ,I backed you, it's a tradition, I did it for others , yours won't be an exception. 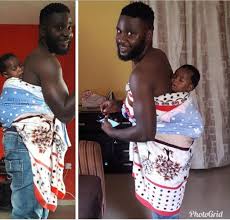 "He broke one of his rules for me,very unusual of him to stay calmly at the back, he even slept obviously, he missed me so much.❤❤
I've got the best nieces and nephews in the world. God bless you Son, you shall grow to be resourceful to yourself and the world at large, you shall be celebrated hugely Ekuule ooo."

Na all this kind one women dey like…see their mouths. lol