Hindi movie ‘KESARI’ will be in Cinemas from March 22nd- See trailer here! 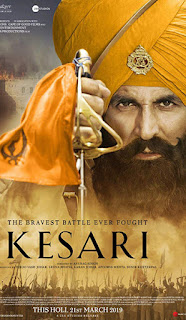 KESARI is based on the true story of one of the bravest battles that India ever fought – the Battle of Saragarhi. The year is 1897 and the British Empire having conquered most of India, is now trying to infiltrate Afghanistan.


The story of a Sikh warrior who participates in the battle of Saragarhi while yearning for the respect of his estranged daughter.