Home News/Gist Lionel Messi Recalled to Argentina squad since after World Cup, while Aguero and Higuain are left out.

Lionel Messi Recalled to Argentina squad since after World Cup, while Aguero and Higuain are left out. 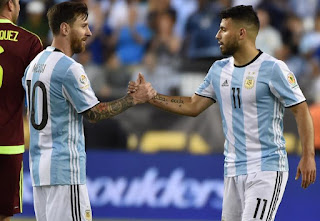 Lionel Messi has been recalled to the Argentina national team for the first time since the 2018 World Cup, after he angrily and frustratingly retired. The Barcelona hit man is part of a 31-man squad for friendlies against Venezuela and Morocco this month.


Others who made the list includes, Paris St-Germain midfielder 31 year old Angel di Maria, who has not played for the country since the 2018 World Cup.
There are four Premier League players in manager Lionel Scaloni's squad - Manchester City centre-back Nicolas Otamendi, Tottenham defender Juan Foyth, Watford midfielder Roberto Pereyra and West Ham playmaker Manuel Lanzini.
However, Spurs left footed winger Erik Lamela and goalkeeper Paulo Gazzaniga have both been dropped. Inter Milan striker Mauro Icardi has also been left out, having not played since 9 February because of an ongoing dispute with the Serie A club.
Manchester City's Sergio Aguero and Chelsea's Gonzalo Higuain also remain absent, having last played for Argentina at the 2018 World Cup.
Argentina captain Messi, his country's record scorer with 65 goals in 128 games, initially retired from international duty after Copa America final defeat by Chile in June 2016 before reversing his decision less than two months later.