Home News/Gist Paris Jackson spotted out for the 1st time with her Lover, Gabriel after the emergency call from her apartment amid Suicide rumours.

Paris Jackson spotted out for the 1st time with her Lover, Gabriel after the emergency call from her apartment amid Suicide rumours. 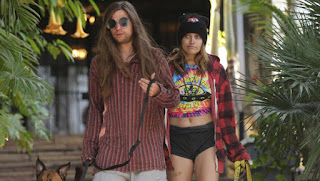 Paris Jackson was seen taking a day stroll in Los Angeles with her boyfriend Gabriel Glenn two days ago, that was on March 29, being her first public appearance since the 911 call, from her reported night of wild partying, was released.


Paris Jackson, 20, didn’t look like she was letting any recent reports about her health bother her as she stepped out walking and smiling with beau Gabriel Glenn. The daughter of the late Michael Jackson wore a tie dye crop top under a black and red checkered hoodie with black hot pants and a black beanie for the outing, while Gabriel wore a red and black striped button down shirt and tan cargo pants. The stroll happened on the same day the shocking 911 call, that led to Paris’ latest hospitalization on Mar. 16, was released.

Despite initial reports that Paris tried to commit suicide, a source close to the beauty claim she was hospitalized that night because she accidentally cut her arm with kitchen scissors after a wild night of partying, writes Hollywoodlife. 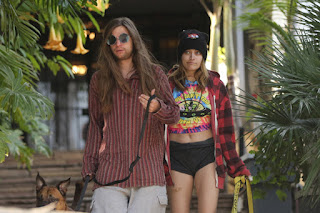 “It turned into a pretty crazy night and she had been acting a little out of control. But she says she accidentally cut her arm with kitchen scissors and it wasn’t a suicide attempt,” a source close to Paris reveals.

“Paris was partying really hard that night – but that’s nothing unusual for her.” Paris also took to social media shortly after news of the hospitalization was made public, and she denied intentionally harming herself.  “f*** you you f****** liars,” she tweeted in response to a TMZ article making the attempted suicide claim.
Just three months ago, in Jan., it was reported that Paris had checked into a treatment facility to work on her “emotional health”, but less than 24 hours after the report, Paris again took to social media to set the record straight. “The media is exaggerating per usual,” she wrote.
“Yes I’ve taken a break from work and social media and my phone because it can be too much sometimes, and everyone deserves a break, but I am happy and healthy and feeling better than ever!”