Prince Harry and Meghan Markle confirm the gender of their expectant baby. 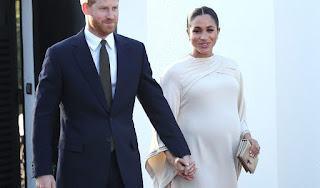 Royal couples, Prince Harry and Duchess Meghan Markle have reportedly revealed the sex of their son to be birthed child.


According a source, the expectant mum, Meghan had revealed to a friend’s during her baby shower in New York City that she’s having a boy. But some other sources have claimed it will be a baby girl…lol.

But let’s keep our finger crossed; I believe God has the final say.