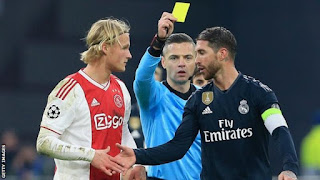 Sergio Ramos says he takes the blame for picking up what Uefa deemed a deliberate yellow card and missing Real Madrid's Champions League loss to Ajax. Ramos' booking in the 89th minute of the last-16 first leg, with Real 2-1 up, meant he would miss the second leg.


But Ramos was given a two-game ban by Uefa for "clearly receiving a yellow card on purpose" and Real, having won three Champions Leagues in a row, went out after losing 4-1 at the Bernabeu.
"Absolutely it was an error…I take the blame 200%."
In a series of posts on his Twitter account on Monday, the Real Madrid captain also launched a passionate defence of the club.
"As footballers, we like to do our talking on the pitch, but this season is not turning out that way. Recent events have been disastrous and I'm not hiding. We are not hiding. We the players are primarily responsible and I, as captain, more than anyone."
Ramos added that the players have "enormous respect for the position" and "always support" the Real Madrid manager.
"It's a decision that's not ours to make and in which we never interfere," he said.
"These reflections are, without doubt, the result of a deeply disappointing season, but if success didn't stop us, we're not going to let defeat stop us.
"It's our obligation to carry on, to work and to evolve. And to remember that some of us are lucky enough to play for Real Madrid, some of us are lucky enough to form part of its history, but Real Madrid was, is and will always be Real Madrid.
"No-one name makes the legend of Real Madrid, but we have all written that legend together."