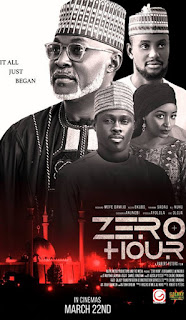 In recent years, Nollywood has kept improving in the quality of movies it churns out, and equally there has been a tremendous progress in its cinema movies, which has been the major reason many people now go to the cinemas across the country to see good movies, equally feeling satisfied and entertained in the end.


It is in this light that we are looking forward to yet another block buster from the industry titled ‘ZERO HOUR’- in the film, the story has a lot of family love, business and crime hanging round its fold. After the death of the CEO of Galaxy Ltd his only child and heir, Zamani (Alexx Ekubo), is back to take over his father’s legacy.

Trailer- https://youtu.be/8mNwNHz2YFw
The film will be released in cinemas from March 22nd.