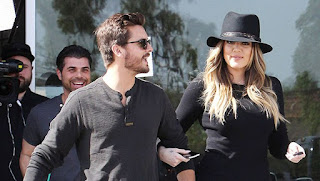 
Scott Disick’s friendship with Khloe Kardashian, 34, just took an interesting turn. He may be dating model Sofia Richie, 20, but that didn’t stop him from calling Khloe his “Woman Crush Wednesday” on March 12. Of all the photos he could’ve chosen, Scott posted a picture of Khloe in a see-through, mesh jumpsuit and wrote on Instagram, “Been waiting all week to post this #wcw.”

Fans have been reacting since that post, as they took to the comment section to air their views: “Y’all have such a weird relationship,” wrote one fan, whose comment received over 1,000 “likes,” while another Instagram user added, “Is this not weird to anyone bc this is most def weird af.”

A third fan questioned why Khloe has made more cameos on Scott’s feed than Sofia has, writing, “The fact that you post Khloe more than your own girl is super strange but yeah she bad.” At least Khloe appreciated Scott’s shout-out, as she commented, “Hahaha!! I love you Scott!”

Other fans were laughing right along with Aunt Koko. “I’ve never laughed so hard, their sic best friends like siblings,” a fan wrote, and many others thought the “#wcw” post was a beautiful ode to their longstanding friendship, as Scott first met Khloe’s sister, Kourtney, at a house party in 2006.

“True pure unconditional love…they are the best,” one such fan wrote. But this isn’t the first time Khloe earned a spot on Scott’s Instagram.
One person thought the timing of Scott’s post wasn’t a coincidence, writing, “If you taking this wrong yall stupid…hes supporting his sister during the drama.”