Home Movies music News/Gist See Priyanka Chopra reaction when she saw the DM her Hubby, Nick Jonas and his ex, Miley Cyprus sent each other days ago.

See Priyanka Chopra reaction when she saw the DM her Hubby, Nick Jonas and his ex, Miley Cyprus sent each other days ago. 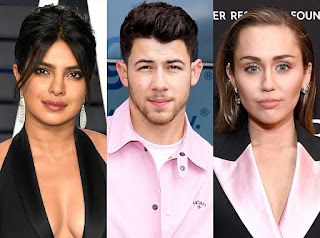 If you grew up in the early-to-mid aughts, then you were probably obsessed with Hollywood's hottest couple: Miley Cyrus and Nick Jonas.


They were undoubtedly Disney Channel's power couple, and fans' hearts broke when the two called it quits. Thankfully, Cyrus released the female anthem for teens everywhere, "7 Things," which was totes about Nick. It was the "Thank U, Next" of that generation.

Fast-forward to 2019 and both celebrities are happily married to other people—Cyrus married her longtime love Liam Hemsworth and Nick tied the knot with Priyanka Chopra.

In honor of Women's History Month, Miley has been reminiscing on her Disney days and early aughts fashion, writes Eonline. So much so, that her series of throwback videos have caught the attention of her former flame: Mr. Jonas.

The "Wrecking Ball" songstress cheekily posted a DM from the 26-year-old star on Instagram. "That moment when even your ex knows your socials have been fire," she wrote with eight accompanying fire emojis.

The Jonas Brothers band member messaged Cyrus, "Amazing. These throwback shots have been fire."
Nick wasn't the only one to notice the "Can't Be Tamed" star's nostalgic posts.
Mrs. Jonas Priyanka reacted to Miley's caption about her beau, writing, "Lol. Hahaha.. Hubby is right. These posts r fire."