Home News/Gist US President, Trump rains more attack on late John McCain in spite all the begging from the daughter for Trump to stop.

US President, Trump rains more attack on late John McCain in spite all the begging from the daughter for Trump to stop. 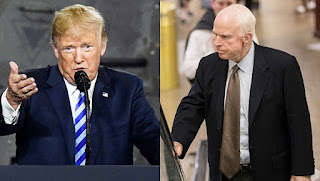 Despite John McCain’s two daughters begging the US President, Donald Trump to stop insulting their dead father, POTUS laid into the late war hero yet again on March 21 by calling him ‘horrible’.


Another day, another instance of Donald Trump, 72, attacking a decorated war hero, who has been dead since Aug. 2018. Trump was on Fox Business Network’s Mornings With Maria show on March 21, when he doubled down on the insults that he hurled at the late John McCain over the last few days, saying, “I’m not a fan. He was horrible what he did with repeal and replace. What he did to the Republican Party and to the nation, and to sick people that could have had great health care was not good. So I’m not a fan of John McCain, and that’s fine.”
Immediately after, news anchor Maria Bartiromo criticized Donald for attacking someone who’s dead and can’t defend himself. “But Mr. President, he’s dead. He can’t punch back. I know you punch back, but he’s dead,” she said.

And Donald, of course, refused to take any blame for slamming John McCain. Instead, he said it’s everyone else’s fault that he keeps talking about the war hero. “No, I don’t talk about it. People ask me the question, I didn’t bring this up. You just brought it up, you asked the question. You asked me the question,” Donald told Maria, just hours after John’s two daughters asked him to please stop trashing their dead father, reports Hollywoodlife.
While Trump’s longstanding feud against the late senator is no secret, he started rekindling it when he tweeted on Mar. 16, “Spreading the fake and totally discredited Dossier ‘is unfortunately a very dark stain against John McCain.’ Ken Starr, Former Independent Counsel. He had far worse ‘stains’ than this, including thumbs down on repeal and replace after years of campaigning to repeal and replace!”
Donald also complained that John’s family, including John’s wife Cindy McCain, didn’t thank him for his funeral, which POTUS also claimed he had to approve (something that Washington National Cathedral has since denied). “I gave him the kind of funeral that he wanted, which, as president, I had to approve,” Trump said at the Joint Systems Manufacturing Center in Lima, Ohio on March 20. “I don’t care about this, but I didn’t get thank you — that’s okay. We sent him on the way, but I wasn’t a fan of John McCain… Not my kind of guy, but some people like him and I think that’s great.”
Trump’s latest attack on McCain comes just says after the late senator’s daughter Bridget McCain asked Trump to leave their family alone. “@realDonaldTrump Everyone doesn’t have to agree with my dad or like him, but I do ask you to be decent and respectful,” Bridget tweeted. “If you can’t do those two things, be mindful. We only said goodbye to him almost 7 months ago.”
On the March 20 2019 episode of The View, Meghan McCain said, “If I had told my dad seven months after you’re dead, you’re gonna be dominating the news and all over Twitter, he would think it was hilarious that our president was so jealous of him that he was dominating the news cycle in death as well. There are kids committing suicide because of cyberbullying online, there are people going through rough times. There are veterans who come back — we have 20 veterans a day committing suicide. Focus on these issues. These are the issues I beg the White House to pay attention to.”