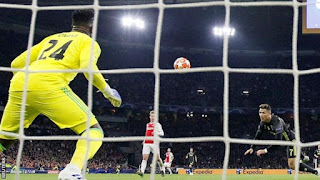 Juventus were not at their best in the Champions League but, once again, that man Cristiano Ronaldo came to their rescue.


The former Manchester United and Real Madrid forward took his tally to 125 goals in 161 appearances in the competition with a superb diving header in Amsterdam last night, writes BBC sports.
He is now 17 goals ahead of his nearest rival Lionel Messi. Can the Barcelona forward - nearly three years younger - catch him?
Ronaldo, 34, made his Champions League debut in 2003 for United, but didn't find the net in the competition until 10 April 2007, when he scored twice in a 7-1 thrashing of Roma- Twelve years to the day later he became the first man to reach the 125 mark with his brilliant header against Ajax.

Messi, 31, made his Champions League bow in December 2004 and initially outscored Ronaldo. Indeed, at the end of the 2011-12 season Messi had scored 13 more goals in the competition.
But Ronaldo's relentless scoring rate - he scored at least 10 times in every season from 2011-12 to 2017-18 - saw the Portuguese open up his current lead.
Messi's 108 goals have come in 132 appearances, at an average of 0.81 goals per game.
For Messi to catch Ronaldo then - presuming that Ronaldo did not score again and Messi continued to score at his average rate - Messi would need another 21 appearances in the competition- If Barcelona reached the final this season, and next season, Messi would be on track to hit the 125 mark in the group stage of the 2020-21 season, when he would be 33.