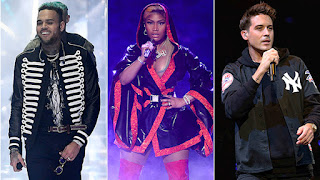 Breezy has blessed up with a new track! Chris Brown dropped a suprise collabo with Nicki Minaj and G-Eazy on April 18 & its FIRE.


Three of hip-hop’s heavy-hitters on one track? Yes please. Chris Brown, delivered what just might be the bop of the summer on April 18, and it’s an epic collaboration with both Nicki Minaj and G-Eazy.
Fans are losing it over the hard-hitting track & instantly took to Twitter with their reactions over the surprise track, reports Hollywoodlife. “Chris Brown just gonna drop a Nicki Ft like that AND NOT SAY NOTHING?!?!?!” one excited fan wrote. “G eazy with Nicki! and chris brown! wowwwwwwwwww” another said.
The NSFW track shows the three rappers alternating verses, with Nicki especially slaying halfway through the track. “I went to the club, and guess who I seen?//A motherfucker that been stuntin’ on me//I told one of the macks, “Yo, back the thing out”//Ain’t showin’ off my jewels, but shots gon’ ring out,” the spits. G-Eazy hops on with a verse of his own. “Ayy, the way you bounce on it//I might have to fuck around and spend a house on it//Down Rodeo, now I’m spendin’ large amounts on it//Swipe the platinum, I might empty my accounts on it.”
Enjoy it here- https://open.spotify.com/album/1CB2iQbBmgf480FiHI1xUS

The fiery new track marks his third of his forthcoming studio album, Indigo. Brace yourselves, because the steamy track is said to be getting a video as well. Something tells us it will not be for the fainthearted!