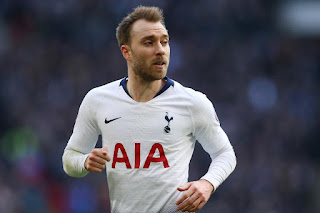 Tottenham midfielder Christian Eriksen is prepared to talk about extending his contract - but not until the end of the season, says boss Mauricio Pochettino.


The 27-year-old Denmark midfielder whose current contract expires at the end of next season has been consistently been linked with a move to Real Madrid, and so far he has held off committing to a new deal, writes BBC Football.
"I hope and wish Christian can be with us in the future," said Pochettino, "I think Christian and us, we are so open to talk and we will see what happens.
"It's a situation that's a very special one and Christian is a special person. The timing for him or for the club to be agreeing something is maybe different to another player.
"It's so close to the end of the season and there's a lot of time to talk afterwards. The most important thing now, not only for him, is for all the players to be focused and try to achieve the things we want."