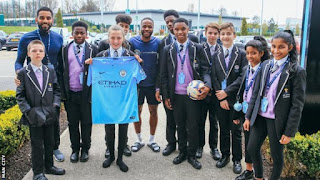 Manchester City forward Raheem Sterling has arranged for 550 pupils from his old school to attend the FA Cup semi-final between his side and Brighton at Wembley on Saturday.


Students from the Ark Elvin Academy in London also met the England international at City's training complex in Manchester on Thursday.
Sterling, 24, was raised near Wembley after moving from Jamaica aged five. He studied at Copland Community School, which was renamed in 2014, writes BBC sports.
"It is great to be able to give these students the chance to watch a game at Wembley," Sterling said. "I grew up right next door to the stadium and would dream of one day playing in a cup final or even representing my country there.
"This is a great opportunity to give back to the community that helped me get to where I am."
Sterling, who has scored 19 goals for City this season, has made charitable donations in the past. In 2017, he made a "substantial" undisclosed contribution to the fund set up after the Grenfell Tower fire.