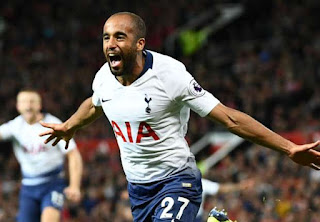 Lucas Moura scored a brilliant hat-trick as Tottenham cruised past relegated Huddersfield and moved above Chelsea into third in the Premier League.


A much-changed Spurs side dominated from the off at Tottenham Hotspur Stadium and deservedly went ahead when Victor Wanyama danced around Ben Hamer and slotted home midway through the first half, writes BBC Football.
Moura added their second just 144 seconds later as he rifled a low shot past Hamer after being played in by Moussa Sissoko. The Brazilian was on the score sheet again three minutes from time as he controlled and volleyed home Christian Eriksen's cross.
And he completed his hat-trick deep into injury time with another emphatic finish past Hamer.
Christian Eriksen and Fernando Llorente had earlier hit the woodwork for Spurs as they piled on the pressure, though Hugo Lloris was called into action late on to tip a Leandro Bacuna free-kick onto the crossbar.
Huddersfield remains bottom and they have now lost six consecutive league games.