Home News/Gist Kim Kardashian is the sexiest mum as she covers ‘Vogue’ Magazine May Issue.

Kim Kardashian is the sexiest mum as she covers ‘Vogue’ Magazine May Issue. 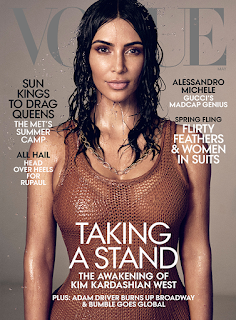 Another day, another ‘Vogue’ cover for Kim Kardashian, who graces the May issue in a slew of sexy outfits, while posing alongside her kids.

Kim K officially the hottest mom there is, as she poses in her kitchen wearing a sexy silk slip dress while her three children, Saint, North and Chicago are pictured next to her, for the May cover issue of Vogue.

While Kim looks gorgeous in the photo, which sees her with short, wet, fresh-out-the-shower hair, it’s her kids that make this picture amazing. To the left of Kim, Saint, 3, is pictured sitting in a completely bedazzled white Bentley convertible with his mouth open as if he’s screaming. Next to Saint, Chicago, 1, is pictured in her bedazzled silver Bentley convertible, crawling out of the seat and looking at her mom adoringly. 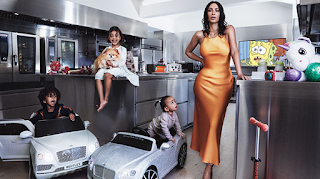 Meanwhile, the eldest child of the three, North, 6, is sitting on the massive Kitchen Island, holding her Pomeranian puppy, Sushi, while smiling brightly at the camera. Kim even revealed to the magazine that her and husband Kanye West, 41, are expecting another son this May.

This May issue officially marks Kim’s eighth Vogue cover, but just her second for Vogue America. It’s already been five years since her last U.S. Voguecover, which she starred in back in 2014, with husband, Kanye.