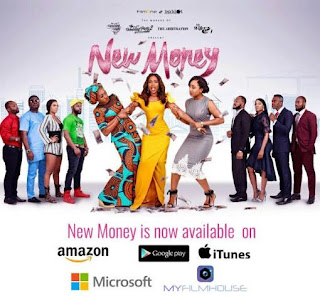 One of the most watched films of 2018, ‘New Money’ has made a new comeback to our screens again.


'New Money' which was received with great enthusiasm from cinema lovers, is now available on digital platforms such as Amazon, Google Play, ITunes and Microsoft.

Directed by Tope Oshin, New Money tells the story of a young girl, who goes from being a shop girl to a billionaire, after her father leaves her his empire to run.

According to the producers of the film, Inkblot Productions, the reason for the film’s availability on these digital platforms is to give opportunity for those who haven’t seen the film to see it, especially those in the diaspora. Also, those who have seen it, and want to see it again, can as well enjoy it.