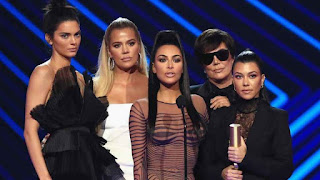 It’s no secret that Kim Kardashian and her sisters get paid millions just to promote products on social media. But now their mom is revealing just how lucrative those deals are for her celebrity daughters.


If you’ve ever wondered how much Kim Kardashian, 38, and her sisters get paid for promoting everything from slimming products to beauty supplements on Instagram, their mom Kris Jenner is providing an answer.

The 63-year-old tells CBS Sunday Morning that her daughters get paid “six figures” for posing with products and sharing those pictures with their millions of social media followers.

The Keeping Up With the Kardashians matriarch makes the revelation during an upcoming episode of the show. “My daughters are constantly getting offers to post something for a company, or a brand, on social media,” Kris says in a preview of the April 14 show. “They have a fee for a post, or a fee for a story, a fee for Facebook … they have a fee schedule.”

As for how much they’re paid, Kris says that it depends on who is posting the product – be it Kim, Kourtney, 39 or Khloe, 34, or her two youngest daughters Kendall and Kylie Jenner who are 23 and 21 respectively according to Hollywoodlife.

Kim, for example, has 134 million Instagram followers, while Khloe has 91.1 million. “I mean, it’s definitely six figures,” Kris says. The pricing also depends on what the ladies are promoting so, if it’s “a pharmaceutical product, if it’s something that you’re going to drink, or ingest, or put on your body” the fee is more, Kris adds.

The Kar-Jenner sisters’ paid promotions have frequently caused controversy. Khloe, for example, has been slammed by The Good Place actress Jameela Jamil, 33, for selling detox and slimming teas. In March the Brit commented on the reality TV star’s paid promotion for Flat Tummy Tea. “You’re a smart woman.